Fancy a tattoo? In hospital, it could be your next type of monitor of your vital signs… Read on…

An "electronic tattoo" could herald a revolution in the way patients are monitored and provide a breakthrough in computer gaming, say US scientists.

They used the device, which is thinner than a human hair, to monitor the heart and brain,according to a study in the journal Science.

The sensor attaches to human skin just like a temporary tattoo and can move, wrinkle and stretch without breaking.

A mass of cables, wires, gel-coated sticky pads and monitors are currently needed to keep track of a patient's vital signs.

Scientists say this can be "distressing", such as when a patient with heart problems has to wear a bulky monitor for a month "in order to capture abnormal but rare cardiac events".

With the tattoo, all the electronic parts are built out of wavy, snake-like components, which mean they can cope with being stretched and squeezed.

There are also tiny solar cells which can generate power or get energy from electromagnetic radiation.

The device is small, less than 50 micrometres thick – less than the diameter of a human hair.

The sensor is mounted on to a water-soluble sheet of plastic, so is attached to the body by brushing with water, just like a temporary tattoo.

It sticks on due to weak forces of attraction between the skin and a polyester layer at the base of the sensor, which is the same force which sticks geckos to walls.

In the study, the tattoo was used to measure electrical activity in the leg, heart and brain. It found that the "measurements agree remarkably well" with those taken by traditional methods. 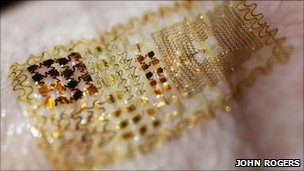 The sensor moves with the skin

Researchers believe the technology could be used to replace traditional wires and cables.

Smaller, less invasive, sensors could be especially useful for monitoring premature babies or for studying patients with sleep apnoea without them wearing wires through the night, researchers say.

Prof Todd Coleman, from the University of Illinois, said: "If we want to understand brain function in a natural environment, that's completely incompatible with studies in a laboratory.

"The best way to do this is to record neural signals in natural settings, with devices that are invisible to the user."

The device was worn for up to 24 hours without loss of function or skin irritation.

However, there are problems with longer-term use, as the skin constantly produces new cells, while those at the surface die and are brushed off, meaning a new sensor would need to be attached at least every fortnight.

When the tattoo was attached to the throat, it was able to detect differences in words such as up, down, left, right, go and stop.

The researchers managed to use this to control a simple computer game.

John Rogers, professor in material science and engineering at the University of Illinois, said: "Our goal was to develop an electronic technology that could integrate with the skin in a way that is invisible to the user.

"It's a technology that blurs the distinction between electronics and biology."

Prof Zhenqiang Ma, an electrical and computer engineer at the University of Wisconsin, argued that the technology could overcome issues with bulky sensors.

"An electronic skin will help solve these problems and allow monitoring to be simpler, more reliable and uninterrupted.

"It has proved to be viable and low-cost in this demonstration which will greatly facilitate the practical clinical use of the electronic skin."